I wanted to send out this newsletter to all our United Israel associates to catch you up on some of the things that have been going on as we head into the Fall and the Holy Days just less than a month away. There is a lot to report and I look forward to sharing with you all. 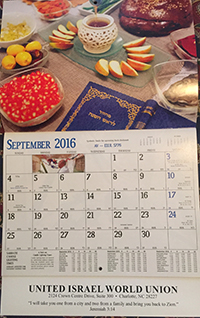 We will be mailing out our special United Israel calendars to our entire surface mailing list next week. If you received one last year you are already on our mailing list but if you are not sure, or you have a change of address, please reply via email to this message and give us your current postal mailing address. There is no charge for these calendars, they are made possible by the generous donation of Doris Trinker, widow of long term UIWU board member Jack Trinker, who died in 2014. The Trinkers have been providing us these calendars for many years and they have been truly enjoyed by all. They include the Torah and Haftarah weekly readings as well as all the standard New Moons and Jewish Holidays with both Gregorian and Hebrew Calendar months and days. 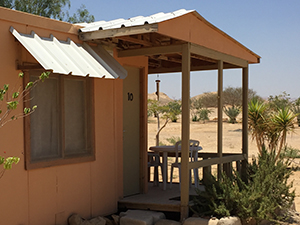 United Israel has formed an agreement with Blossoming Rose in the Negev Desert in Israel to have our own space reserved there on a permanent basis. This has been arranged through our close association with DeWayne Coxon, President of Blossoming Rose, and his associates. DeWayne has spoken at our United Israel April Conference many times over the past few years and he and I, along with Ross Nichols, have organized several successful tours to Israel together since 2010. Biblical Tamar has many attractions, not the least of which is the spectacular archaeological excavation over which Blossoming Rose has caretaking responsibilities in co-operation with the Israel Antiquities Authority. This historic biblical site, known as Ir ‘Ovot in the Torah, and Tamar, in the Hebrew Bible, was one of the encampments of Israel in the days of Moses and marked the southernmost border of the ancient land of Israel (Number 21:10; 1 Kings 9:18; Ezekiel 47:19). 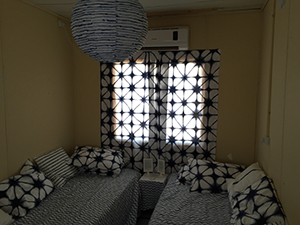 Although our little room represents only a tiny “foothold” in the Land of Israel it represents a significant presence for us both literally and symbolically. I stayed there this summer and began to furnish the room according to to our “blue and white” theme as designed by my wife Lori Woodall, who also did the design for our office here in Charlotte. It is really a lovely place. It reminds me of the verse in Jeremiah 9:1 where the prophet prayed with longing, “Oh that I were in the desert, in a lodging place for wayfaring men.” 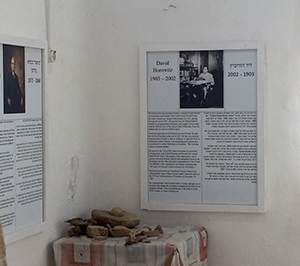 The historic work of David Horowitz and United Israel has also been recognized now in the Hall of the History of Israel’s Founders at Tamar right next to other pioneers of Zionism such as Theodor Herzl, Orde Wingate, President Harry Truman, Golda Meir, and David Ben Gurion. Blossoming Rose features seven historic periods as part of Biblical Tamar Park: Abrahamic, Mosaic, Israelite, Roman/Christian, Islamic, British, and modern Israeli.

An additional emerging involvement with Blossoming Rose and Biblical Tamar that has us very excited is through two of our United Israel leaders, Lloyd Willard and Lance Cantley (who is an ordained United Israel minister). They have recently have formed a non-profit organization called The Good Land. The mission of The Good Land is pioneer innovative agricultural practices for restoring the Land and producing nutritious food without the use of artificial fertilizers or pestisides. Willard and Cantley, in consultation with our United Israel officers and board, have now formed a relationship with Dr. Coxon that involves establishing some soil testing plots at Tamar with the goal of discovering what is needed to see the “desert bloom” in the natural way spoken of by the Prophets (Isaiah 35:1).

Let’s Travel to Israel Together in March 2017!

I wanted to invite all of you receiving this newsletter to consider traveling to Israel with us in March of next year. Ross Nichols has put together a fantastic tour for March 3-14, 2017, along with Dr. DeWayne Coxon of Blossoming Rose. I will join the tour as a guest teacher and Lori and I both are very much looking forward to the time together in the Land of Israel with those who go with us. The price is really reasonable–if you compare other tours there is nothing out there with this value, including the quality of hotels and the selection of the sites we will visit. Collectively the three of us have many many decades of experience with traveling to Israel and we simply know how to do it right! Whether you have never been to Israel or have gone before, this is a tour you will not want to miss. Pictured here is one of my favorite places in the world–the “Sukkah” gathering place at Tamar. Imagine sitting with us under the stars, around the fire, and talking over the adventure of a lifetime–yards away from the Biblical city of Tamar. Also, if you come with us you can also visit firsthand out new United Israel “Room No. 10” sanctuary and be part of this little piece of history.

Check out the itinerary here, watch the video, and I think you will agree this is the tour for you! There are still spaces though we want to limit the tour to one bus so we can all spend maximum time together–from Dan to Beersheva! 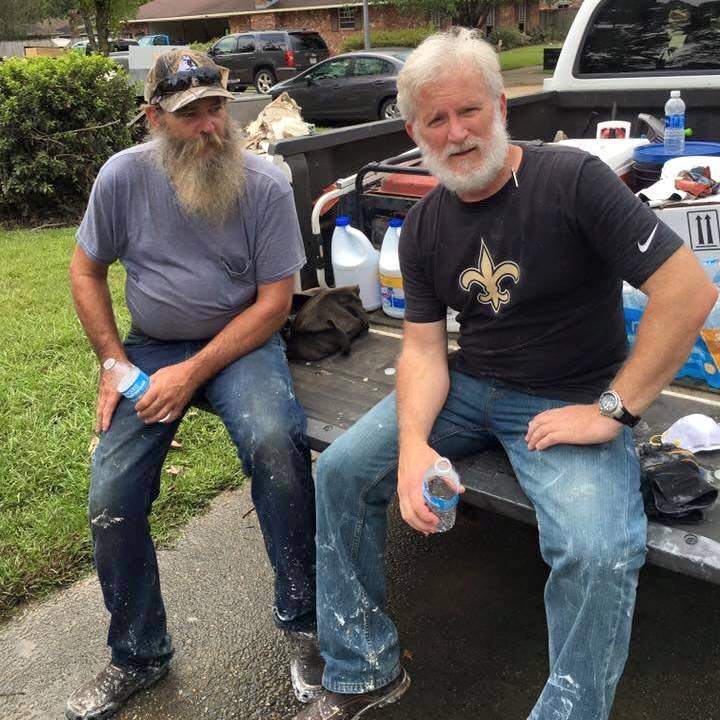 I am sure all of you are well aware of the terribly devastation that hit the Baton Rouge, LA area the weekend of August 13th with the record rainful and horrible flooding. This is right in the neighborhood of Ross Nichols and our Roots of Faith folks who immediately went into high gear in helping those who had been damaged by the flooding. Ross, Dave Cole, and others have been involved in these relief efforts for nearly a month now and they have set up a Storm Relief Fund. 100% of funds contributed go directly to individuals needing help from storm damage with no overhead costs removed as with most funding efforts. We hope you will give generously if you have not yet.

Some of you may have heard that Ross Nichols, United Israel Vice President, was abrubtly let go from his job at Georgia Pacific after nearly 25 years. For anyone this would be quite a shock but Ross has taken time out to think about his future and for now has decided to devote himself full time to his work through Roots of Faith, an outreach effort of United Israel World Union. He has thrown himself totally into this new direction with great enthusiasm and energy. His efforts so far involve teaching on-line via YouTube each Sabbath, producing podcasts, developing our web sites, teaching Hebrew classes, writing and publishing, and leading tours to Israel. And all of this has been in the midst of the devastation of the flooding in his area–to which he has devoted so much time. If you have not checked his web site lately you will be impressed–Ross moves fast and gets a lot accomplished, even when he was working 40+ hours a week for Georgia Pacific. I can’t even begin to imagine what he will be able to do now. He has also begun a new social media oriented Facebook Group I would encourage you to join if you use Facebook: https://www.facebook.com/groups/rootsoffaith/. Last count it already had 333 members and growing.

As most of you know our previous United Israel web site was hacked by a Muslim group in Algeria and totally destroyed. We have now rebuilt it from scratch and it is emerging as steadly with more content and features than the old one had. We are adding updates each week and have plans for much more more. Be sure and bookmark unitedisrael.org and visit us often–and be sure to check out Ralph Buntyn’s amazing new series: “Remembering David Horowitz.” You can find the archive of all his past posts here.

This is by no means a fund-raising letter but one of the new features of our site is a Donate button on the Home Page so that you can make donations on-line via Paypal either with a Paypal account or using a credit card. We encourage you to use it. All donations are carefully spent and 100% goes for the many good efforts we are involved in with nothing wasted.

Finally I wanted to highlight one of the many “good works” our United Israel people are doing all over the country and throughout the world–including our ministers. Here is David Tyler performing a Biblically centered Hebraic wedding ceremony in up State New York this past weekend for some friends, Edwin Oakes and Kelly Sexton. By all accounts David did a marvelous job. I know our founder David Horowitz would be most proud. 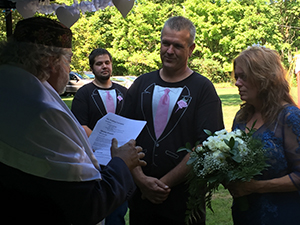 Warmest best wishes and Shalom to all!