Cry aloud to God our strength, raise a shout to the God of Jacob.

This evening at sundown the Jewish holiday popularly known as Rosh HaShanah begins. Literally, rosh ha-Shanah ( ראש השנה) means “head of the year.” It is commonly included on our secular calendars today as one of the “Jewish Holidays,” along with Passover and Yom Kippur, and is widely known as the “Jewish New Year.” Surprisingly though, on the Jewish calendar it is the 1st day of the seventh month, not the first day of the first month–so how could it mark a new year? 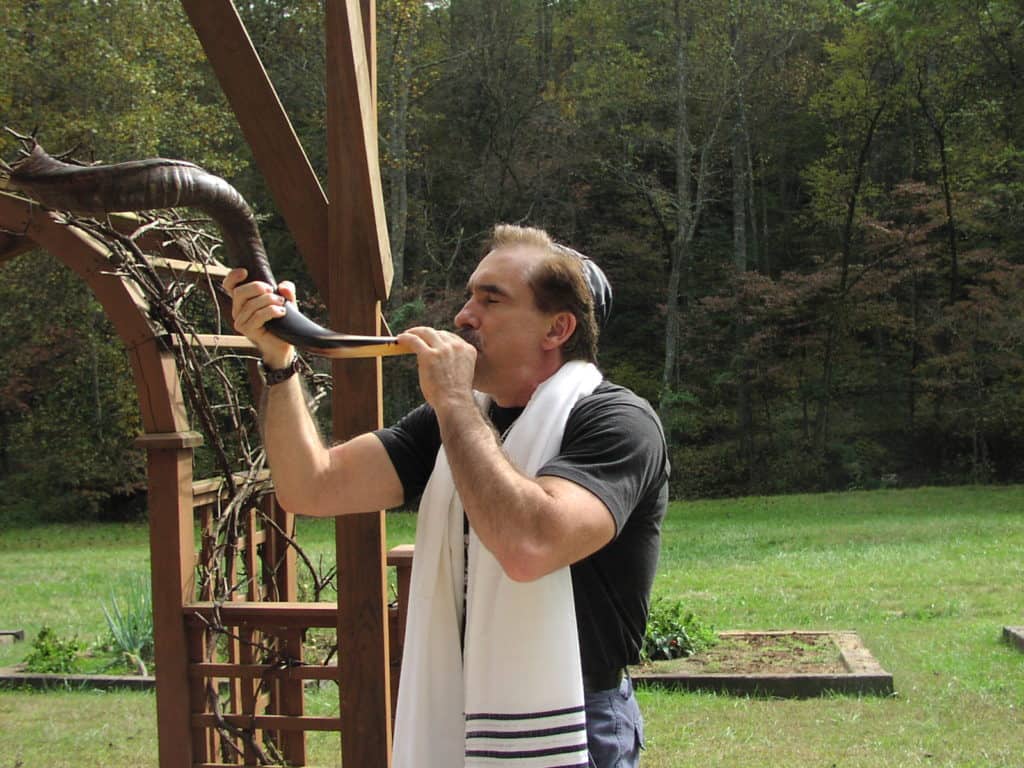 In biblical times, and on the Jewish calendar today, the “months” are lunar months, marked by the appearance of the “new moon,” 12 or 13 times in a solar year of 365.25 days. Judaism has two ways of marking the beginning of a year. The term “year” in Hebrew, shanah/שׁנה, is related to a verbal root meaning “to change” or “to turn.” Accordingly, one can refer to the “turning” of a year. The seasonal New Year is the first day of the first month, as Exodus 12: 1 puts it:

This Moon/month shall be to you the beginning (rosh, lit. “head”) of months.”

I suppose one could call it the original or primary “Rosh HaShanah,” as it comes with the beginning of the Spring and is therefore tied to the barley harvest and its seasonal ripening. That day is very significant in biblical and Jewish history as many events have taken place on Nisan 1st–the biblical New Year, marking times of “new beginnings” (Exodus 40:2; 2 Chronicles 29:17; Ezra 7:9; 10:17).

The “Jewish New Year” that begins at sundown tonight falls on the 1st day of the 7th lunar month–as Fall begins. It marks the beginning or “turning” of a different kind of year, one that in ancient times had to do with certain calculations regarding the Jubilee, the redemption of bond-servants, and so forth. It is kind of a “legal” New Year, much like our July and Oct “fiscal years” in our society today, having to do with land redemption and various financial arrangements.

In the Torah itself this holy day is never called Rosh HaShanah. Rather it gets a different name–Yom Teru’ah, that is “day of the blast.” Teru’ah/תרועה in Hebrew refers to raising up a loud noise, whether the shout of a human voice, such as a battle cry, or the piercing sound of a shofar or “trumpet” as a call of assembly or alarm–much like our modern concept of a siren.  Thus many Christian groups that keep this day refer to it as the “feast of Trumpets,” though that phrase never occurs in the Hebrew Bible.

There is, however, an association of this day with a “trumpet,” or more properly, a “shofar,” in Psalm 81, coupled with the word teru’ah or “shout.”

Cry aloud to God our strength, raise a shout to the God of Jacob.
Lift up a song, and give out a timbrel, a pleasant harp with psaltery.
Blow in the month a shofar, in the new moon, at the day of our festival,
For a statute to Israel it is, an ordinance of the God of Jacob.
A testimony in Joseph He hath placed it, in his going forth over the land of Egypt (Psalm 81:2-6).

Note the specific and somewhat surprising reference to Joseph–the lost son of Jacob whose name, along with that of his son Ephraim, later becomes associated with the scattered Northern Tribes of Israel (see Ezk 37:15-24). He of course lost his “identity,” and became unknown to his brothers, living among the Gentiles.

The instructions in Leviticus 23, where all the biblical festivals and sabbaths of the Jewish calendar are laid out, are amazingly sparse. Absolutely no hint as to its purpose or meaning is given. It is a “memorial” or “marking” of something, but of what?  There one is simply told:

Speak to the people of Israel, saying, “In the seventh month, on the first day of the month, you shall observe a day of solemn rest, memorial of teru’ah, a holy convocation (Leviticus 23:24).

This is quite literally a “commemoration” announced by a blasting sound–whether of shouting or that of a shofar. The best clues to the ancient meaning of this day are found in Psalm 80 & 81. The connection here to the tribe of Joseph is quite interesting. The Hebrew Prophets have connected the sound of the shofar as a call to the scattered 12 Tribes of Israel to regather in the Land of Israel–perhaps the most dominant theme in the Prophets (Jeremiah 23:5-8; 30:1-3; 33:27-40):

Is. 27:12   In that day from the river Euphrates to the Brook of Egypt the LORD will thresh out the grain, and you will be gathered one by one, O people of Israel. 13 And in that day a great trumpet will be blown, and those who were lost in the land of Assyria and those who were driven out to the land of Egypt will come and worship the LORD on the holy mountain at Jerusalem.

Later, as the messianic and eschatological expectations of both Jews and Christians developed in the Late Second Temple period (300 BCE to 70 CE), the idea of the blowing of a final Trumpet of Judgment began to develop. It came to be associated with a call or warning of impending judgment and even the resurrection of the dead. Paul writes that the return of Jesus in the clouds of heaven and the resurrection of the dead will commence with the “sound of the trumpet of God” or “the last trumpet” (1 Thessalonians 4:16; 1 Corinthians 15:52). In the gospel of Matthew the “elect” or chosen ones, which would make up a kind of “true Israel,” are gathered at the end of days by the sound of a “loud trumpet” (Matthew 24:31).

Since this day of Teru’ah comes ten days before Yom Kippur, the solemn day of “covering” or atonement, the blast of the shofar was thought to signal a call to introspection and judgment. The rabbis believed that “ten days of awe,” between the two festivals are a time when the world stands in judgment and the doors of repentance are open. This view, which has become the standard perspective of Judaism today, predominated. The rabbis emphasize that whereas Passover, which falls in the first month of the Jewish calendar, celebrates the freedom of Israel from slavery in Egypt, this “Day of the memorial Blast,” that falls in the seventh month, is a call to all humankind to stand before God in judgment.