On Politics and Religion 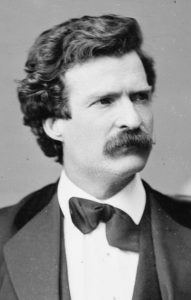 Mark Twain once said, “In religion and politics, people’s beliefs and convictions are in almost every case gotten at second-hand, and without examination, from authorities who have not themselves examined the questions at issue but have taken them at second-hand from other non-examiners, whose opinions about them were not worth a brass farthing.” I tend to agree.

Somewhere along the way I was instructed that one should avoid discussing Politics and Religion in polite company. Since I have chosen to openly speak my mind on Religious matters, I choose to remain out of political discussions. I often joke that I make enough enemies with my religious views, and don’t need any more as a result of my political views. I have purposely stayed away from political commentary for many reasons. People within the “religious community” have so much that already divides us that this seems to me to be just one more point that can and will cause people of faith to lose focus on things of great importance. I sense that it will only get worse in the coming weeks and months. For this reason I have felt led to focus people not on the political scene but on the clear and pure message found within the Hebrew Scriptures. A message that does not change regardless of who holds or will hold political office.

Popular media personalities will have you believe that our world is headed to hell and that this course is being charted by our politicians. They further suggest that placing other more capable people at the helm will remedy the dire straights we find ourselves in. And this has been the view preceding every election in our history. Will religious folk be able to fix their world at the polls? Will we finally vote in the long awaited herald of good tidings who will bring peace, harmony, justice and righteousness to our burdened land? Is there now or will there ever be such a candidate from which to choose? Does an elected official who does not meet this criteria prevent us from working on the things that promote decent society? How will our land be healed? What must we do to fix our world? Is it in the hands of present or future politicians? God, I hope not!

The answer to the question of what we must do to “heal our land” in my opinion is clearly communicated in II Chronicles 7:14.

2Chr. 7:14 if my people who are called by my name humble themselves, and pray and seek my face and turn from their wicked ways, then I will hear from heaven and will forgive their sin and heal their land.

God says that if “My people who are called by My name” do this, He will (1) hear from heaven, (2) forgive their sin and (3) heal their land. No one seems to want to go through the trouble of following the biblical pattern. It is much easier to point the finger and shake the head at those “in charge.” If history is any indicator of the future, the next group of politicians will be blamed for whatever problems the world faces under their watch. But at what point do religious people ever take responsibility for fixing the world? Is this something that we believe is the job of politicians?

If religious people are waiting on any government system to repair the world, I say that they have not understood the servant mission to which the Bible calls them. It is, and always has been the task of “Holy” people to fix their world. Very few are up for the challenge of fixing the world. The task seems too daunting. But what if people actually began to work on fixing themselves and then on helping their neighbors? If enough people actually did this, we would make good progress towards making the world a better place.

I do not want to join a secular choir that sings a song of blame. A choir whose members are not directing people to the faith defined by the Hebrew Scriptures, but who place their hope in a particular person or political party. In many ways they are distracting us from what we should focus on. Some would argue that leadership is affecting our ability to live according to Scriptures by their actions. Here, I would have to disagree. Even if laws are imposed that attempt to prevent our freedom of worship, perhaps we should read Daniel, or the story of the Maccabees. How did they deal with it? Did they stop praying to their God when ordered to and cry about the “current administration?” Did they violate the commandments because the law of the land forbade their religious practices? Do we find them whining about the fact that their rulers are from a different denomination or religion? I think that the answers to these questions are obvious.

As for me, I want to focus my teachings on the Scriptures. I pray that the words I speak will lead people to take a hard look at their own lives and cause them to make corrections when they discover fault or failure in their own walk. Our message must remain unique. We need to consider that the responsibility to choose God’s ways are inalienable. This does not mean that following God will always be easy, or that it will always be legal.

If we ever begin to truly believe that God is in control we might just take to heart the message of the Scriptures. We might just appreciate a place where we are free to worship according to our beliefs, regardless of the beliefs of the past or future leaders of our land.

If people want to speak or hear political arguments for one or the other side of any election there are plenty of places to go. If people are interested in what the Bible says about fixing the world in which they live, they should shake the dust off of their Bible, turn off the television and begin to thumb through the pages. I also recommend keeping a mirror handy as you might be looking harder at yourself than you have in the past. Put the binoculars away. Objects in the mirror are closer than they appear.

May He Who grants salvation to kings and dominion to rulers,
Whose kingdom is a kingdom spanning all eternity,
Who releases David, his servant, from the evil sword,
Who places a road in the sea and a path in the mighty waters –
May He bless, protect, guard, assist, elevate, exalt, and lift upwards
Our master CZAR NIKOLAI ALEXANDROVICH,
With his wife, the honorable CZARINA ALEXANDRA FEODOROVNA
Their son, the crown prince ALEXI NIKOLAIOVICH
And his mother, the honorable CZARINA MARIA FEODORAVNA
And the entire house of our king, may their glory be exalted.
May the King of kings in His mercy give him life, and protect him,
And save him from every trouble, woe and injury.
May nations submit under his feet, and may his enemies fall before him,
And may he succeed in whatever he endeavors.
May the King of kings, in His mercy, grant compassion in his heart
and the heart of all his advisors
To do favors for us and for all Israel, our brethren.
In his days and in our days, may Judah be saved, and may Israel dwell securely,
And may the Redeemer come to Zion.
So may it be His will – and we say:  AMEN.

Regardless of your political views, don’t lose sight of your religious responsibility. How about praying for those in positions of leadership, if not for their well being, for your own.