A Glutton and a Drunkard – Jesus and the Dead Sea Scrolls? 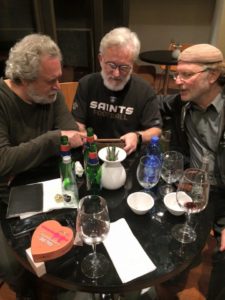 In March of 2016, three-time Emmy winner for Outstanding Investigative Journalism, director, producer, and New York Times Best selling author, Simcha Jacobovici, stirred the religious community when he suggested that a Dead Sea Scroll fragment (4Q541) might be referring to Jesus of Nazareth in an article called, Jesus Discovered in the Dead Sea Scrolls. He closed that article suggesting that “if” this is the case, then, “maybe some other fragments are also referring to him.” And so, to test his theory, Simcha set out to study another Dead Sea Scroll fragment (11QT54) that mentions crucifixion. He wrote of this continued investigation in an article titled, Jesus and Paul in the Dead Sea Scrolls. Initially he saw no obvious connection between this DSS fragment (11QT54) and Jesus. Simcha writes:

When I looked at “11QT54,” at first it seemed to be a straightforward quotation from the Book of Deuteronomy (21:18) legislating how to deal with a “rebellious” son who is a “glutton and a drunkard”….nothing to do with Jesus. But then came the eureka moment.

What was that Eureka moment? It was a connection between the Torah’s “glutton and drunkard,” and a saying preserved within the gospel tradition. I shared this connection with Simcha in a private meeting in Israel based upon my own studies of two versions of Matthew, preserved in Hebrew.

Recently, my friend Ross Nichols pointed out to me the connection between the “glutton and drunkard” line in the Gospels and the passage in Deuteronomy that uses the same terms.

Whether one can agree with the conclusions of the present writer, or with Simcha, it is to the ancient sources that we must go in order to discover the intended meaning of ancient authors. It would seem that the saying preserved in the gospels, referencing a glutton and drunkard, may in truth have nothing to do with eating or drinking, but rather a charge made clear only by looking to its use in the ancient Torah of Moses.

The Original Article – A Glutton and a Drunkard

In the well known gospel account of the wedding at Cana, Jesus is recorded as performing a miracle in which he changes water into wine. Many have debated on whether or not the wine was fermented. Did Jesus drink fermented drink? In one gospel passage, his enemies are reportedly calling him a “drunk and a glutton.” In this blog post I will show that the charge most likely has nothing at all to do with drinking. The source of the name calling can be shown to be the Torah of Moses and may have more to do with a charge of rebellion against authority than with having too much to eat and drink.

Deuteronomy chapter twenty-one contains a passage that could shed some light on our understanding of the events that led to the execution of Jesus of Nazareth. Within this passage is a charge that was made against Jesus by some of his religious rivals, and recorded in the canonical Gospels – though it has gone unnoticed by most students of the life of Jesus.

RSV Deuteronomy 21:18 “If a man has a stubborn and rebellious son, who will not obey the voice of his father or the voice of his mother, and, though they chastise him, will not give heed to them, 19 then his father and his mother shall take hold of him and bring him out to the elders of his city at the gate of the place where he lives, 20 and they shall say to the elders of his city, `This our son is stubborn and rebellious, he will not obey our voice; he is a glutton and a drunkard (זולל וסבא – zolel v’soveh).’ 21 Then all the men of the city shall stone him to death with stones; so you shall purge the evil from your midst; and all Israel shall hear, and fear.

This law is considered in the Talmud [i]. There it is stated that the “law of the ‘rebellious son’ has never occurred, and never will occur…”. In the rabbinical discussion mentioned above, the rabbis conclude that this passage in the Torah pertains to the partaking of a meal by the offender; a meal they called the meal of the rebellious son [ii].It is doubtful whether the exact legislative discussion, defined in Jewish literature was well known in the first century, but the text of Deuteronomy certainly was. The Temple Scroll, found among the Dead Sea Scrolls, contains this very passage [iii]. We also know from the canonical gospels that this charge of being a rebellious son was made by some against Jesus. We do not possess evidence from the gospels that his mother or father ever brought him before the elders of ‘his city’ with this claim. We do however meet from time to time with family confrontations in the gospels, most of which are explained as examples of hyper dedication on the part of Jesus to perform his father’s business [iv]. This dedication to religion over family obligations is also spoken of in the scrolls. [v]

At any rate, Jesus says himself that this charge was being laid against him by some unidentified source.

RSV Matthew 11:19 the Son of man came eating and drinking, and they say, `Behold, a glutton and a drunkard, a friend of tax collectors and sinners!’ Yet wisdom is justified by her deeds.”

This text is also found in the Q source (7:34). The Hebrew text of Shem Tob’s Matthew, as well as the Du Tillet Hebrew Matthew [vi] both read זולל וסבא – zolel v’soveh in accordance with Deuteronomy 21:20. It is preserved in such a way that it hardly remains noticeable as a direct link to the charge indicated in the Torah. First, we are inclined to take the charge of the unidentified ‘some’ as a scornful reference to Jesus’ eating habits [vii]. While the eating habits of Jesus were unlike those of his ascetic cousin John, the text in Matthew 11:19 is more likely referring to the prevalent view of the religious leaders of Jesus’ day that he was a rebel.

Perhaps there are other sayings preserved within the New Testament corpus that are yet to be uncovered that will shed new light on the views of the religious authorities that led to the execution of Jesus. While blasphemy is normally understood to be the motivator of several attempted ‘stonings’ of Jesus (Mark 16:64; Matthew 26:65-66; John 19:7; John 8:59; 10:31-33) perhaps there were other factors such as rebellion against parental and religious authority that led the Jews to a negative appraisal of his self-proclaimed task.

[ii] The meal had to be witnessed by two witnesses besides the parents (Yad, Mamrim 7:7). The Jewish literature also records that the following circumstances must be met in order to fit the sentence described in Deuteronomy 21:18-21;

[iv] Luke records how Jesus remained in Jerusalem while his parents were returning home. This apparently caused some dispute with the young lad, who retorted, “Don’t you know that I am about my Father’s business?” One could also include various accounts scattered throughout the texts that show some disparity between Jesus and his close kin. Examples would include Mark 3:30-35 and similar texts; John 2:4 etc.

[v] 4Q175 “…who said of his father and mother, ‘I knew them not;’ he ignored his kin, and did not acknowledge his children. For he observed your word, and kept your covenant.”

[vii] Proverbs 23:20-21 speak of being a ‘glutton and a drunkard’ and even associates the true path as being obedient to parents (v. 22).